At the time of European contact there were about 126 "tribal" groups having all or most of their territories in the Northern Territory, with an estimated total population of 35,000.

These people were hunter-gatherers who lived in small family groups of 15, 30, called bands. Bands were the basic residential and economic unit. Groups of bands formed larger social units that anthropologists have called "communities", "tribes", or "culture blocs", depending on whether a political, linguistic or religious perspective is taken. 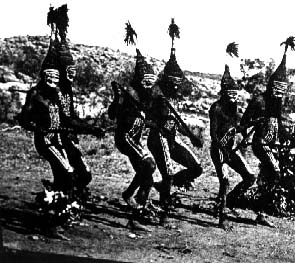 People within such social networks frequently co-operated to exploit abundant resources during good seasons or to share scarce resources during drought or flood. The links between groups were based on kinship and marriage ties, common ceremonial affiliation and shared ownership of, or responsibility for, sacred sites and objects.

The geographic distribution, density and mobility of the Aboriginal population were closely related to the availability or water, food and other resources. Generally, the size of the bands did not vary as much as the extent of the tract of land (called the range) needed by each group for its survival. In the desert regions of the Centre population densities as low as one person per 100 sq km reflected Aboriginal adaptation to a far harsher environment. The Walpiri, for example, inhabited an area of nearly 40 000 sq km, while the Wangkanguru even successfully adapted to the Simpson Desert. In arid regions large territories allowed groups to survive by foraging in a seasonal and systematic manner over vast areas.