The Arrernte speaking people were those who occupied most of the choice regions in the Mac Donnell Ranges. Their territory stretched about 110 kilometres to both West and East and was about 330 kilometres in extent from North and South.

Though forming one language group, the Arrernte were divided into six sub groups, each with its particular territory. These sub-groups were further divided into small family or kin groups, all bound by the very rigid system of authority governed by intermarriage and movements over another group Estate.

The boundaries of Estates of these sub groups were fixed by the ancestral being and varied greatly in size.

Altogether there are now 36 grand children and 126 great grand children that makes up the Pwerte Marnte Marnte Aboriginal Corporation , (a community as it is known today).

Our Home, Our Land

We Don't Own This Land, the Land Owns Us!

It is difficult for others to appreciate this identity, as the anthropologist Professor W.E.H. Stanner found when he tried to put it into words for non-Aboriginals to understand:

No English words are good enough to give a sense of the links between an Aboriginal group and its homeland. Our word "home", warm and suggestive though it be, does not match the Aboriginal word that may mean "camp", "heart", "country", "everlasting home", "totem place", "life source", "spirit centre", and much else all in one. Our word "land" is too sparse and meagre. We can now scarcely use it except with economic overtones unless we happen to be poets.

The Aboriginal would speak of "earth" and use the word in a richly symbolic way to mean his "shoulder" or his "side". I have seen an Aboriginal embrace the earth he walked on. To put our words "home" and "land" together into "homeland" is a little better but not much. A different tradition leaves us tongueless and earless towards this other world of meaning and significance. When we took what we call "land" we took what to them meant home, the source and locus of life, and everlastingness of spirit.

Since the early 1970's small groups of Aboriginal people have been moving away from larger settlements like Alice Springs, to establish outstation communities in the bush. The outstation or homeland movement reflects a desire by Aboriginal people to reafirm links with their land and their culture. At outstations there are still people who hunt and gather, live in bush shelters little different from pre-contact ones, and participate fully in ritual.
However, the outstation movement does not represent a simple return to the pre-contact past or a rejection of introduced goods. People have adopted and adapted European technology and foods to suit their own needs.
In 1990, a group of elders descendants of Penangke in conjunction with the Central land Council negotiated with the owners of the Orange Creek Station leasehold and small incisions of 1500 hectares to re-establish their community.
This Community living area was granted in 1993. Since that time 7 houses have been built and a power generator have been established. 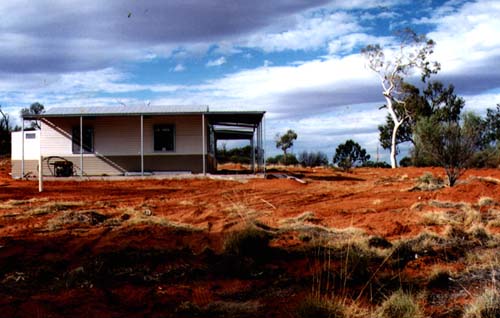 In 1997, the community started a work program with 8 trainees enrolled in small business and tourism courses in Alice Springs.