According to Aboriginal belief, all life as it is today - Human, Animal, Bird and Fish is part of one vast unchanging network of relationships which can be traced to the great spirit ancestors of the Dreamtime.

The Dreamtime continues as the "Dreaming" in the spiritual lives of aboriginal people today. The events of the ancient era of creation are enacted in ceremonies and danced in mime form. Song chant incessantly to the accompaniment of the didgeridoo or clap sticks relates the story of events of those early times and brings to the power of the dreaming to bear of life today. 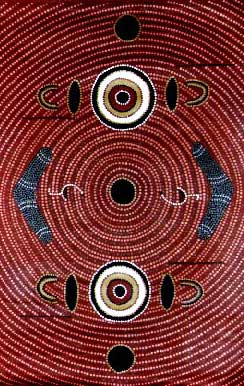 The Dreaming world was the old time of the Ancestor Beings. They emerged from the earth at the time of the creation. Time began in the world the moment these supernatural beings were "born out of their own Eternity".

The Earth was a flat surface, in darkness. A dead, silent world. Unknown forms of life were asleep, below the surface of the land. Then the supernatural Ancestor Beings broke through the crust of the earth form below , with tumultuous force.

The sun rose out of the ground. The land received light for the first time. The supernatural Beings, or Totemic Ancestors, resembled creatures or plants, and were half human. They moved across the barren surface of the world. They travelled hunted and fought, and changed the form of the land. In their journeys, they created the landscape, the mountains, the rivers, the trees, waterholes, plains and sandhills. They made the people themselves, who are descendants of the Dreamtime ancestors. They made the Ant, Grasshopper, Emu, Eagle, Crow, Parrot, Wallaby, Kangaroo, Lizard, Snake, and all food plants. They made the natural elements : Water, Air, Fire. They made all the celestial bodies : the Sun, the Moon and the Stars. Then, wearied from all their activity, the mythical creatures sank back into the earth and returned to their state of sleep.

Sometimes their spirits turned into rocks or trees or a part of the landscape. These became sacred places, to be seen only by initiated men. These sites had special qualities. 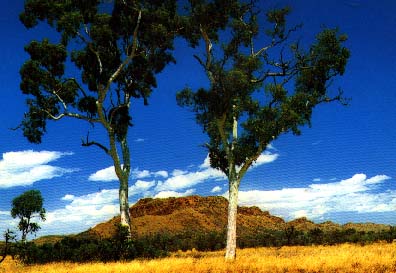 'We don't own the land, the land owns us'

'The Land is my mother, my mother is the land'

'The land is our food, our culture, our spirit and identity'

'We don't have boundaries like fences, as farmers do. We have spiritual connections'

Land means many things to many people. To a farmer, land is a means of production and the source of a way of life. It is economic sustainability. To a property developer, it is a bargaining chip and the means of financial progress and success. To many Australians, land is something they can own if they work hard enough and save enough money to buy it. To Indigenous people land is not just something that they can own or trade. Land has a spiritual value.

We are the Indigenous people of Australia. Aboriginal people are those traditional cultures and lands lie on the mainland and most of the islands, including Tasmania, Fraser Island, Palm Island, Mornington Island, Groote Eylandt, Bathrust and Melville Islands. The term "Aboriginal" has become one of the most disputed in the Australian language.

The Commonwealth definition is social more than racial, in keeping with the change in Australian attitudes away from racialistic thinking about other people. An Aboriginal person is defined as a person who is a descendant of an Indigenous inhabitant of Australia, identifies as an Aboriginal, and is recognised as Aboriginal by members of the community in which she or he lives.

This definition is preferred by the vast majority of our people over the racial definitions of the assimilation era. Administration of the definition, at least by the Commonwealth for the purposes of providing grants or loans, requires that an applicant present a certificate of Aboriginality issued by an incorporated Aboriginal body under its common seal.

Sometimes non-Aboriginal people get confused by the great range and variety of Aboriginal and Torres Strait people, from the traditional hunter to the Doctor of Philosophy; from the dark-skinned to the very fair; from the speaker of traditional languages to the radio announcer who speaks the Queen's English. The lesson to be learned from this is that we should not stereotype people ; that people are different, regardless of race.

Our people, of course, did not use the word "Aborigene" (from the latin ab, origin meaning "from the beginning" to refer to ourselves before the coming of non-Aborigenes. Everyone was simply a person.