A suggestions that the 'emu decoy', reported in several parts of Australia, may have been a precursor of the didjeridu in some areas is to be found in an extract from Roth (1902); he writes (23-4), with reference to instruments called yili-yiki observed in north Queensland (to the north-east of area 'Y'), that 'hollow hardwood saplings' about from 7 to 9 ft long were observed in a region which included Cooktown, Laura, Palmerville, Maytown, Byerston, Bloomfield, the Daintree and Cape Grafton. He adds that 'the use of this instrument on the Bloomfield, like the "bull-roarer", is taught at the initiation ceremony, but unlike the latter, it can be played in the camp before the gins and uninitiated males."

It is never employed in this locality for imitating the call of the cassowary (cf., the 'emus calls' of the Gulf country), though, curious to say, the blacks have a legend that it was (and still may be) used by certain spirits for that very purpose, long before they themselves 'knew how to use it'.

The resemblence between the words yiki-yiki and yiraki (or yidaki), the latter the name for the didjeridu in northeastern Arnhem Land (Yuulngu) languages, claims attention. According to information obtained from a Yuulngu man from Yirrkala, yiraki means 'emu throat'. On Groote Eylandt, the word for didjeridu, yiraga, is associated with throat only; there are no emus on the island.

In his study of words used for the hollow-log (Ubar) drum, poles and trumpets, Worms found that ubar, uwar and uluru (north west Arnhem Land) and ulpirra, ilpirra and uluburu (central Australia) were 'linguistic variations of the same stem'. Though not reserved for these instruments only, Worms concluded that 'the root meaning is revealed in some way in gilbir (East Kimb.), telling, saying, language, story, and in ma-galbiran, ma-gilbiran(West Kimb.), to enchant, to spell. But the radical meaning becomes really evident in the Western Victorian occurrence of kalpiran, kalpernera, kaprina, the dead soul of the deceased, ghost' (Worms 1953:280). 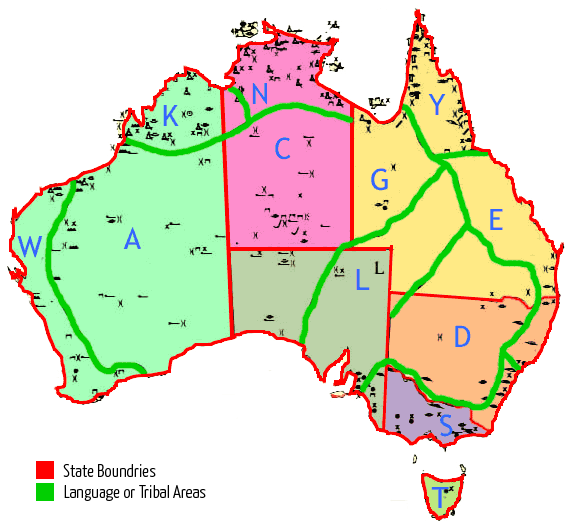 The 'inside' or esoteric word for 'didjeridu' used by the Yuulngu in the Djalambu (hollow-log) mortuary ceremony of the yirritja moiety, is djalupi. Remarkably similar are the following two esoteric words obtained for the instrument: djalupu (Ranjbarngu language) in area 'N' and djalupun (Worora language) in area 'K'. There appear to have been several routes along which songs accompanied by Didgeridoo have travelled in the past. Organonymy (by analogy with toponymy) would seem to be an essential part of organology.

Within Arnhem Land, a careful distinction is made between different types of percussive accompaniment in ceremonial performances. Cult songs accompanied by boomerang clapsticks have been mention above. There are also large, slowly-beaten, paired sticks used accompanying songs of Narra (Maraian) rituals. Because of their high ceremonial status, one might reasonably assume that Narra songs are older than didjeridu-accompanied songs of the same region. On the other hand, in the process of it's 'intrusion' into Arnhem Land music, the didjeridu may have function to some extent as a music 'fixative', preserving renments of songs styles of earlier period. If this has been the case then the pre-didjeridu song vestiges still retained could be as old, or older, than songs associated with Narra-type rituals.

There appears to be no standard shape or size to which an Arnhem Land didjeridu must conform. The acoustic behaviour of each individual specimen will depend on length of the tube and shape of its near conical bore. From measurements made by the writer in different parts Arnhem Land it is apparent that tubes (hollowed branches or bamboo) measuring about 1 m to 1' 6 m, in length are sought. The lowest audible tones on tubes cut to these lengths are within a frequency range of from 70 to 100 Hz.