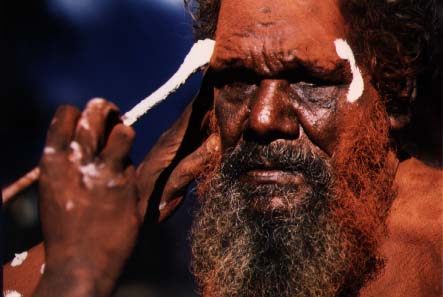 Aboriginal ceremonies (known to most people as corroborees) are dramatic representations, in mime and song, of the mythical history of the tribe. These ceremonies have many functions and take many forms.

There are the non-secret rituals performed in the camp at night, before an enthusiastic audience of men, women and children. A group of adult men, seated around a small fire, will chant one or another of the ancient songs, while others, their bodies decorated with strange symbols, portray , in a series of spectacular dances, the incidents in the myth.

The ceremonies of the youths, at which no fully adult male or any women are present, are the most important to the participants. In these, the young actors, their bodies decorated with the creature they represent, mime the episodes of their creation during mythical times. These rituals, many of them of considerable beauty, are the youth's first step toward their integration into the life and responsibilities of the men.

Nothing is neglected in these ceremonies to teach the youths the rules and philosophy of the tribe and the obligations that accompany them; trials of fortitude and the air of secrecy that surrounds every phase of the rituals are designed so to impress the youths that neither the rituals, nor their associated meanings, will ever be forgotten. They will guide his behaviour as long as he lives.